Years ago, I decided to read through the Book of Genesis: it was the first Bible book that I read start-to-finish. About two-thirds of the way through, I encountered a story that, in my teenage life (at that time), I had positively never heard preached or taught. It was shocking, and not a kids' story at all - and that's an understatement.

This story's main figure was DINAH, the only daughter of Jacob the patriarch that is mentioned in the scriptures.

For those unfamiliar with her story, I encourage you to stop reading this post, pick up your nearest Bible and read Genesis chapter 34 (or, click here to read Genesis 34 in the KJV).

I could discuss the many surprising matters that occur, but let me focus in specifically on the central character in consideration: Dinah, herself. 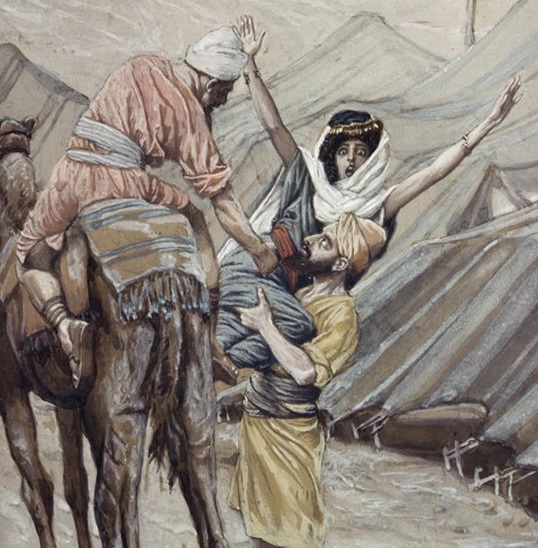 That's the first bit we have to be clear on. At no point is she pictured as a sinful or wayward girl. To me, this is the perplexing part. By all measures, she was a good daughter, and yet she becomes entangled in this mess.

Genesis 34:1 records, "And Dinah the daughter of Leah, which she bare unto Jacob, went out to see the daughters of the land."

That's it. She just goes to see other women of the country. Not seeking any "missionary dating" (also known as dating outside of the faith). No partying or pre-meditated rule-breaking. But there are dangerous elements here.

If I may, the problem with Dinah was not sin, but lack of protective guidelines. She had none of her brothers around her: no "covering" so to speak to keep her away from dangerous situations; no fences or guardrails. These terms and ideas are generally how Apostolic Pentecostals describe holiness standards or personal consecration.

Is it a Heaven-or-Hell issue?

An entire generation or 2 of Apostolics have been DESTROYED by this question. Youth or frustrated church members will leave a certain holiness guideline simply saying "it's not a Heaven-or-Hell issue" or "I won't lose my salvation because of this". I have even penned a number of entries on this blog dealing with the topics of Holiness and Heaven-or-Hell issues.

Dear reader, I don't wish to overload you, but for me this is an area of strong personal feelings. I've watched longtime friends drop out of church altogether, and often their initial questions began with these lines of thinking. "Is ALL that really necessary? ... Is that an essential? ... Won't I make Heaven without that?"

It's not just about avoiding eternal Hell, but also some traps and speedbumps. I believe that God loves us enough to give guardrails and lane markers for us to dodge some pot-holes and steer clear of a few precarious places. I believe there are many consecration principles that are God-given to keep you free of the current moral compromises and sin-numbing fads.

Without her protection around her ...

Without covering or defense or whatever other term you prefer for a consecrated lifestyle, here's what happened to a good girl.

"And when Shechem the son of Hamor the Hivite, prince of the country, saw her (Dinah), he took her, and lay with her, and defiled her."

And it never should have happened.

Without protection beyond the minimum, and honestly believing she was safe, she entered a major city of the ancient world, and was grabbed & forced by a pagan prince.

If you read on, you'll find she was imprisoned by something (or, someone) that wouldn't turn her loose. That's not the final state of this either. She did get rescued, eventually, but lives were lost, and her whole family was put in danger now.

The moral of the story

As of this writing, I am not a father of any children. I don't know what it's like to hurt for your son or daughter, but to any father reading this I believe that you would move Heaven itself in an attempt to protect your family.

Now, equally so, would you move your own personal holiness fences and the practiced standards of your family to a protective placement? Would you set the consecration bar of your household in a configuration that others would possibly criticize, but you don't care because your kids' safety means MORE than people's jabs or put-downs?

If Jacob could speak to us, I believe he'd tell us it's worth it.

Actually, Jacob can speak to us. Read what he has to say.

"Then Jacob said unto his household, and to all that were with him, Put away the strange gods that are among you, and be clean, and change your garments: And let us arise, and go up to Bethel; and I will make there an altar unto God, who answered me in the day of my distress, and was with me in the way which I went. And they gave unto Jacob all the strange gods which were in their hand, and all their earrings which were in their ears; and Jacob hid them under the oak which was by Shechem."

I don't think it's a coincidence that in the very next chapter, Genesis 35, we read that he consecrates his ENTIRE family. They change their clothes, they put away ALL false gods (anything coming before Jehovah-God in their lives), and they also put off their jewelry. All of it goes.

Dear friends, for your own protection, for your children, and for the safety of the generation to come, let us be separated unto God!