- December 04, 2017
One day many years ago when I was still working in my old job as a scientist, I was crunching data that wasn't adding up. I was running statistics on tables of numbers from someone else's experiments, and the results were not reasonable. They were nonsense. They were confusing.

I had run the same statistics on several other similar experiments, and they all checked out. Only this one didn't give the expected output. After about 6 hours of me checking and rechecking everything that I could, a light bulb went off. I realized why this one table of numbers in this one experiment didn't add up. Someone had made them up!

The person who had given them to me had forged them, thinking "no one will ever check these." But I was that no one who was checking them, and I had discovered their fraud! 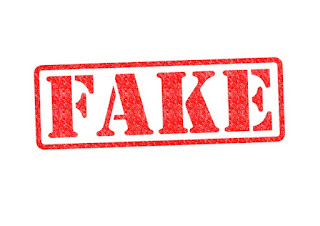 I later met the people face-to-face who had done this experiment, and they admitted to cutting corners. They never thought their slipshod work would affect anyone: they were under time constraints, and firmly believed they'd done no wrong. Yet there I was explaining how their mistakes were affecting my work several years down the road.

The example I've given above is in the realm of Science, but the same phenomenon also occurs in The Church!

There are people who present things as Biblical and Truth, when they are not. There are teachers, we are told, who will have "itching ears" - telling saints what they WANT to hear instead of what The BIBLE really says.

A person who presents themself as someone they are not is an IMPOSTOR, and that is the subject of this post.

In the time after Jesus ascended, His followers attempted to band together in groups. There were about 120 in the upper room. There were also scattered followers and believers in various towns who had seen Jesus and witnessed His miracles. However, there was a 3rd group that we must discuss. This group professed belief in Jesus, but DENIED the Authority of the Apostles. We get pieces of this in 1 Corinthians chapter 1.

"For it hath been declared unto me of you, my brethren, by them which are of the house of Chloe, that there are contentions among you. Now this I say, that every one of you saith, I am of Paul; and I of Apollos; and I of Cephas; and I of Christ."
(1 Corinthians 1:11-12)

But lastly, there was a group in verse 12 that said, "and I of Christ" - some believed that Jesus alone was enough. As appealing as that thought may be, it is incredibly dangerous.

But Paul wasn't alone. John also dealt with individuals who refused the authority of The Apostles:

"I wrote unto the church: but Diotrephes, who loveth to have the preeminence among them, receiveth us not. Wherefore, if I come, I will remember his deeds which he doeth, prating against us with malicious words: ..."
(3 John 1:9-10)

John "wrote unto" a church, but some fellow named Diotrephes apparently THREW OUT his letter! But he didn't just ignore John's epistle (which was lost to time), he went around attacking The Apostle John! For all ministers who read these words and have faced criticism, know that the Apostles too had people who spoke against them.

I guess there were people who believed the sayings of Jesus alone were enough.


The current evidence of history directs us to believe that Jesus's followers began to write down his words not long after He ascended. This was probably a good idea - if you and I had been there and heard Jesus, we would've wanted to remember His teachings and every saying we could think of. So, writing them all down would've been a good undertaking of The Church. There is even textual evidence of this in the original Greek wording in the Gospels of Matthew & Luke. So the early churches probably would've had access to numerous sayings and written sermons of Jesus.

If you were a man who claimed to believe in Jesus but ignored His Apostles, you were in a tight spot. Jesus Himself commissioned their ministry. The Apostles were also the ones who penned The New Testament, so attacking them would be attacking the writers of the Christian Bible.

These non-Apostolic nominally-Christian believers realized that the only way other people would ever accept them is if they had scriptures of their own to back up their beliefs. So during the lifetime of the Apostle Paul, these wayward individuals began doing something evil - they wrote false gospels! They penned what modern scholars call Pseudepigrapha - books that claim they were written by one person when they were actually written by someone else.

"Now we beseech you, brethren, by the coming of our Lord Jesus Christ, and by our gathering together unto him, That ye be not soon shaken in mind, or be troubled, neither by spirit, nor by word, nor by letter as from us, ..."
(2 Thessalonians 2:1-2)

Did you catch that? He said, "nor by letter AS FROM US"! People were penning letters as from The Apostles! They were Biblical impostors, and they were wrong.

Many of these fall into the category of "Gnostic gospels" - books penned by a weird sect of pagan-philosophy-influenced Christians and then retroactively attributed to historical new testament figures. These include the Gospel of Thomas (which is now widely thought to have been written about a century after the crucifixion), the Gospel of Judas Iscariot (which scholars say came to exist around 130-170 AD at the earliest - well after Jesus's life & ministry), and the Gospel of Mary Magdalene (which, once more, most scholars agree was written in the 2nd century AD).

Seeing a pattern yet? Most of the forged gospels were written about 2 generations after the Apostles (AD 130-200): a time during which the True Church was competing with false churches and false beliefs. That doesn't sound too far off from how we see Christianity in the modern day, is it? Back then, as today, modern false Christians generate a variety of books and media to uphold their erroneous beliefs. Some promote a salad-bar view of Christianity. Some take a sin-accepting interpretation. Others believe everyone is ok where' they're at. But all fall short in one defining instance - The bible does not back up their pet beliefs and false doctrines. Then, as today, scripture supports The Apostolic church!

Are there other false gospels and false epistles? Yes, and they come in all shapes and sizes. Some are even outright forgeries by modern sensationalists (The Secret Gospel of Mark). But I believe you get the picture.

Whatever competing strange and fantastic beliefs the world has flung in front of us, history and textual evidence are pretty clear: we have The Bible penned by The Apostles.

I guess this is why so many mainline denominations have begun to express that they don't take the Bible literally anymore. Taking the Bible literally would mean believing in Acts 2:38, Acts 8:15-17, Acts 19:5-7, and a host of other scriptures that contradict their denominations' core teachings about the Biblical plan of salvation. It would also mean accepting Spiritual gifts and operations which don't occur in their meetings, but happen every week in the Pentecostal church.

The Apostolic Church is not one option among many Christian denominations. We are the continuation of the same revival that Jesus started on The Day of Pentecost. The Apostles preached it. Jesus spoke it. And we believe it!