- May 23, 2018
Service was tremendous! The worship was great. Musicians played and sang with their whole hearts. The Word was preached enthusiastically and uncompromisingly. The altar call saw numerous souls crying out to God. All throughout this, you could feel the STRONG pull of The Holy Ghost. God's spirit was pouring out on Sunday! You felt proud to be Pentecostal that day.

But somewhere in the back of the church, a soul was upset. They even appeared ANGRY at the overflow of worship today. After church, they quickly whisked themselves into the foyer, where they spoke words of discouragement to whomever dared address them.

This could have been the best service of the year, but they would find issues with it. You may have watched multiple souls speak with new tongues for the very first time, but they still believe "we didn't do enough tonight". The preaching could've put the best ministers of Pentecost to shame, but they would pick out ONE sentence in the 35-minute sermon with which they find fault.

What kind of person focuses on every bad thing? I have a thought. 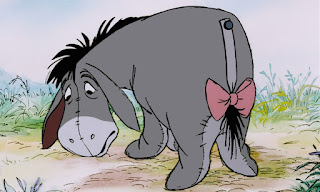 They're the one who is perpetually upset with the Pastor. You have not heard them compliment a service since the Reagan administration.

They're the one you are afraid will catch you after church. This man or woman has the uncanny ability to bring a rain cloud onto a sunny day.

Being a "wet blanket" is definitely not one of the Gifts of The Spirit - but if it was, they've got it.

As interesting as it is to describe these kinds of people, there's a question that bugs me about them: what could possibly transform an otherwise-ordinary brother/sister into an Apostolic 'Eeyore'?

The hole in their heart

There has to be a reason for their disposition. No one is happy being unhappy. I know the common saying, misery loves company, but what makes them miserable in the first place?

The odd feature of Pentecostal "Eeyore's" is that they are normally quite faithfully in their church attendance. These are not "some-timers" in God's house, so something deep inside is telling them to come. Yet something else inside them is also telling them not to enjoy it.

The answer can be summarized in one sentence: they have been hurt!

The wound is a reminder of their vulnerability, and the longer they live without true healing of the soul the deeper the infection in the wound.

Bitterness sets in, and makes them somebody they are not. Eventually, their anger reaches a breaking point. They snap.

They must find someone to blame. Perhaps it really is someone else's fault, but that someone else is now long gone. They have to find a fill-in to throw their vitriol at, and that fill-in becomes anyone who gets close enough to them.

Thus, wounded souls become the hermit-crabs of Pentecost. Choosing of their own free will to be the lonely island on the ocean.

The most common advice given to 'hurt' members of God's family is: "just get over it"!

I cannot tell you in words how potentially damaging that advice truly is. Pretending it isn't there will last all of a few days, or until the next person says something to you that reminds you of your offence. It is similar to the concept of flashback triggers for those suffering with Post-Traumatic Stress Disorder (PTSD) - one such trigger and you're back on the merry-go-round of the walking wounded.

As real as a broken leg or a cancerous tumor, a Spiritual wound can drastically hinder your day-to-day ability to function.

So how can they fully recover? The source of the wound must be dealt with. In the Sermon on the Mount, Jesus said:


"Therefore if thou bring thy gift to the altar, and there rememberest that thy brother hath ought against thee; Leave there thy gift before the altar, and go thy way; first be reconciled to thy brother, and then come and offer thy gift."
- Matthew 5:23-24

In other words, it is the Christian responsibility of the offender to reconcile with the wounded brother. This was even to come before any offering (financial or otherwise) was given at the altar.

Jesus broached this subject again in The Gospel of Matthew:

"Moreover if thy brother shall trespass against thee, go and tell him his fault between thee and him alone: if he shall hear thee, thou hast gained thy brother. But if he will not hear thee, then take with thee one or two more, that in the mouth of two or three witnesses every word may be established. And if he shall neglect to hear them, tell it unto the church: but if he neglect to hear the church, let him be unto thee as an heathen man and a publican."
- Matthew 18:15-17

There is a progression here. First, you begin by attempting to quietly resolve it between you and them. If that does not work, the second step is to take 1 or 2 witnesses with you and peacefully try again. If this person does not budge with witnesses surrounding you, then the situation is more serious than a private matter. As a third and final option, the issue goes before the church. If this person refuses to repent with the church as witnesses to this issue, then according to Jesus they are "an heathen man or a publican" - which is to say, they are no longer a Christian brother or sister. There is no place in The Kingdom for a maniac going around wounding their own family in God (a subject I dealt with in an earlier blog post).

This is strong language for what feels like a small thing, but what appears to you as a microscopic wound or offence can cause that individual to lose out on Church all together. That is no joke.

Years ago, my father preached a sermon with the title, 'Christian Cannibals'. the message is still with me decades later. The sermon text comes from Galatians 5:15:


"But if ye bite and devour one another, take heed that ye be not consumed one of another."

Question: what do you call a human being who BITES and DEVOURS another human being?

This is the Spiritual condition of an offender and wounder-of-the-brethren. They have 'gone native', Spiritually-speaking, and now eat up their brothers. Cannibals are dangerous. They must not be tolerated in civilized life, and for a Christian this means the Spiritual civility of God's Kingdom forbids the savage act of tearing away at your brother.

So what becomes of the wounded? They need our help in getting to the root cause of the wound, of course, but a patient can only be treated if they consent to be treated. Healing takes a willing individual acknowledging their need for recovery.

If I am not well, I must trust the hands of the Physician to repair me. Healing starts with an act of faith, trusting God and the church with the care and treatment of the wound.

So we return back to the original issue of this blog post - can a woe-be-gone Brother be healed? Oh yes, most certainly, if they are willing!