Did God send Ruth a Boaz?

It's a story I've heard preached many times. A love story of 2 people in ancient Israel. One, a man raised in the people of The LORD. The other, a woman who had some living under her belt, raised in a pagan culture, and leaving all that for new life in God.

I love the story of Ruth & Boaz. It's awesome, and it's TRUE! It has a great, happy ending (more on that later).

But there's a misconception I've picked up on recently. There's an idea currently circulating in our church singles circles and youth meetings. And that idea is simply this: that God sent Ruth a BOAZ.

Ruth did marry Boaz, and God did unite them and orchestrate the whole thing, but this framing of the story is NOT true. God did NOT send Ruth a Boaz. 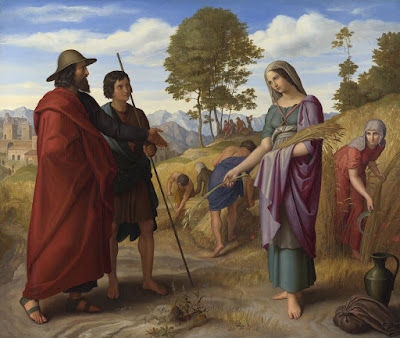 I suppose it's "the consumer model" - which is to say, often right relationships in God are viewed through the PASSIVE lens, complete with us believing that all we need do is stand our ground and the significant other of our dreams will simply ARRIVE, fully formed.

Does that sound right to you??

We KNOW that's not quite correct. We know, even if we don't affirm it vocally, that the manifestation of our faith is WORK! Work to get where God wants us. Work to live Godly and be the fullness that God desires of us. And yes, *work* for a Ruth to get to her Boaz.

Who left their family to start this new life? ... Ruth did! Ruth left Moab for the land of Judah in Israel. In much the same way, Rebekah left Laban and her family in Haran in Genesis chapter 24 in order to go to Canaan and marry Isaac, Abraham's son. She left her past-life in a distant country to receive the miraculous newness that was this life and family that God had waiting for her in the land of Promise!

Who chose NOT to remain with her friends who wrongly decided that idol-worship and non-promised territory was good enough? ... Ruth did. Others did not make the same faith-choice and life-blessing change that Ruth did, and yet ON she went. Orpah may have stayed, but Ruth didn't. I personally believe that she had to ignore unspoken peer pressure and silent judgment of her friends in order to VENTURE OUT to the place where GOD would lead her and bring her to Boaz. And you probably will, too, but Ruth's have the Holy Ghost courage to tune out the other voices and journey to get their promise of The LORD.

I could keep giving examples, but you get it. RUTH did the work of leaving, going, traveling, working, and believing until the day arrived.

And now, my favorite part.

Ruth & Boaz were absolutely, inexcusably, inexplicably CLUELESS! They were there, together, yet neither made a move toward the other. It took *external* nudging for their marriage ceremony to happen.

Thank God for Naomi. Thank GOD she was BOLD and wise enough to help Ruth get there near Boaz to make an impression on him. Thank God for Ruth who didn't back up when her make-or-break moment came.

And when Boaz saw her, he was ready to get married to her. I'm convinced all true Boaz's know what they want, and are prepared of God for that day when it comes. He began immediately to make preparations and begin the process of their new life together.

And, as all fairy tale love stories go, "they all lived happily ever after".

I hope this becomes a story for someone. Maybe it already is. But whoever you are, dear reader, my prayer is that THIS is your story. That you get your ever-after. That God fulfills your deepest dreams and brings alive your prayers. Dear one, may you receive your promise. May Ruth & Boaz live, happily ever after.