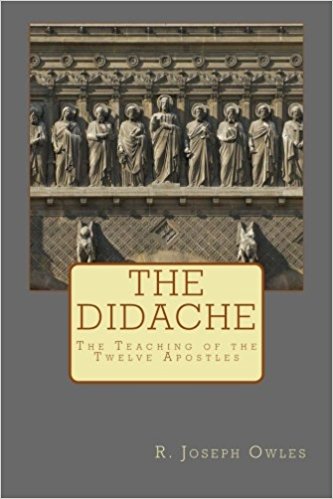 Meet the Didache. It is a not a part of the Bible (it's one of the false books I described in an earlier post), but it was taken seriously by a small group of early Christians. It is not scripture, nor should it be, and it is quite strange.

But aside from being a cautionary tale, false gospels give a second vital insight: they teach us HOW exactly some folks went wrong in early Church history. We know that certain individuals ignored or attacked the Apostles (3 John 1:9-10; 1 Timothy 1:18-20). We also know that by the 2nd century AD several flavors of false teaching had appeared and become widespread. What is not so clear historically is HOW this transpired, and that is what makes the errors of false books so important - they reveal the hidden histories of false doctrines and wrong approaches in the church.

Somehow-someway, the dominant lifestyle for Christian ministry in the dark ages became that of celibacy, even though we are told by The Apostle Paul that "A Bishop must be the HUSBAND of ONE WIFE" (thus, Bishops were married / non-celibate). Even a cursory reading of scripture shows marriages and active relationships of various men of God: Philip The Evangelist had 4 daughters (Acts 21:8-9); Peter's wife's Mother was healed by Jesus, so he was married, too (Matthew 8:14).

It thus was in vogue to ignore the basic meaning of certain Bible passages for hundreds of years in what history calls the Dark Ages. The situation got so serious that it was ILLEGAL for the average person to own a copy of The Bible - and if they did own one, only 1 (very problematic) translation was allowed.

We shall begin a few hundred years before these false ways became ubiquitous. Let's start with the generation immediately after Jesus.

A time of upheaval

The Council of Jerusalem, which we read about in Acts 15, took place about 20 years after Jesus ascended (~ 50 AD). About 20 years after that meeting, Jerusalem itself no longer existed - it was surrounded and destroyed by the Roman army in 70 AD. Uncertainty reigned in this day for Israel. The Jewish people were under Roman rulership (technically called the Province of Judea).

The early church in this era was both pushing for its own survival as well as evangelizing numerous regions of the Roman Empire and beyond. In this morass of Christian persecution and political unrest, there arose a handful of isolated Christian communities. Some were cut off from their fellow believers by the inherent dangers of long-distance travel and local difficulties with the Roman authorities.

However, other Christians became isolated by their own choices. As I discussed in a blog last month, they shunned the voices of Peter & John & Paul. They chose to chart their own course. The problem with isolation is that we are warned REPEATEDLY in The New Testament about the dangers of not fellowshipping with our Brothers.


"Whosoever hateth his brother is a murderer: and ye know that no murderer hath eternal life abiding in him."
- 1 John 3:15

To hate my brother is to become a MURDERER. What greater statement of hatred could I make than to ignore the fact that my Brother exists? Disfellowship is DEATH - the death of your Godly familial relationships with other members of The Kingdom.

Certain Christians disfellowshipped their Brothers. What do you call a church that has no fellowship? A church that recognizes no authority but that of their own local leadership? No Bishops to guide them, no Elders to advise them, and no fellow-Pastors with which to "iron-sharpen-iron"? There is only one word to capture such isolation and inwardness: CULT! These communities became the first Christian cults.

The Orders & Rules of a Cult

Even cults have rules - usually quite lengthy ones. There is often an appeal to extreme orderliness among separated groups like these. Evidence of this is found in The Didache.

For starters, the writers of this false book claim it to be "The Lord's Teaching Through the Twelve Apostles to the Gentiles". As gonzo as it is to basically throw out every other gospel and claim that yours is the one that Jesus gave directly to the Apostles, these people saw nothing crazy in saying this. Already, we're off to a maniacal beginning.

Also, when they say "The 12 Apostles", do they mean the Original 12 Apostles or "The 12 Elders who happened to oversee this particular church or group of churches"? The latter seems more likely. Perhaps it began as 12 elders of a Christian congregation claiming to have personal prophetic visions of Jesus. Perhaps it was a lone kook starting his own church separate from the well-agreed-upon Apostolic authority of the day, who then back-dated his lunacy to historical apostles. In either case, we have the document we have.

The first section of it is a duality of the-way-of-life-vs-the-way-of-death. Such A-vs-B discourse was common Greek philosophers of the day: ESPECIALLY among the false-teaching practitioners of Gnosticism, who probably influenced these folks.

Let's look at the highlights of what follows in The Didache:

- The Didache teaches that pouring for Baptism was acceptable, even though every reference to Baptism in The New Testament uses the Greek word for full immersion.

- Also, The Didache teaches that Baptism HAD to be performed using "living water", meaning lake, river or ocean water (and not from a well); again, we do not see such a statement from The Disciples. This reveals how SMALL false teachings were already creeping in before baptism in the trinity became dominant and false preaching prevailed.

- Churches were told by The Didache that Prophets (or traveling ministers) could not stay for more than 2-3 days. If they stayed more than 3 days, they were deemed "false prophets". Once again, this teaching is NO where in the sayings of Jesus in The Gospels. So why would they include such a weird restriction? Probably because The Apostles stayed for months and years at-a-time to help desperate churches and repair difficult situations (Acts 19:8-10); they needed some official reason to disfellowship Peter & Paul and block them from coming, so it appears they arbitrarily decreed no one was allowed to stay and minister for more than a couple of days.

- Mandatory fasts were held on Wednesday & Friday of every week, prior to regular Sunday service. It's the mandatory nature that is curious. These groups possibly absorbed several ascetic and ritualistic traditions of Judean communes. The Pharisees had a number of extra-Biblical requirements, and the Essenes were known to impose waiting-periods to join. The fasting possibly served such a purpose: discouraging all but the extremely committed from joining their cult.

I enjoy strange tales of history as much as the next minister, but these are more than historical footnotes. The Didache shows us how a group of nominal Christians became a cult of isolated wackos.

It all began by removing themselves from fellowship. This is a danger that we still deal with today. It is also a call for us to reach out to disparate churches and figuratively-barricaded communities of Pentecostals. I must not allow myself to be alone in my Kingdom service.

How can I guard myself from doctrinal buffoonery?
By intentionally seeking fellowship among believers.
By joining in cross-regional ministry efforts.
By attending meetings with my Brothers and others in 5-fold ministry.
By supporting Kingdom warriors in seasons of duress and difficulty.
Lastly, by accepting Apostolic authority; whoever that be for me, I need the council of Elders and Bishops.
I need my Brothers and fellow-warriors in The LORD!